Bitcoin, the most famous cryptocurrency in the world, breaks a price record again! The coin set a new all-time high of $68789.63 on November 10, 2021. BTC updated its previous record of $66,930.39 on October 20, 2021. 2021 was a turbulent year, both inside and outside the Bitcoin scene. Time for a brief look back: what big things happened in the world of Bitcoin, and how did this beautiful record market price come about? And what can we expect from the crypto-king next? Will  Bitcoin go up even more? Let’s find out in our Bitcoin coin review!

The bitcoin price has become increasingly responsive to the outlook for inflation and interest rates, as it has begun moving in line with stock prices.

“Inflation is an obvious concern with crypto prices correlating tightly to equities. But this concern has risen even more after Elon Musk acknowledged how big of a major concern it is for Tesla and SpaceX. More than anything, the fact that “inflation” hit its biggest interest spike in months is a reminder of just how much influence Elon continues to have on price direction,” analysts at Santiment noted in a recent BTC price analysis.


“Perhaps worldwide sanctions, currency scares and fear of various government crackdowns is why Bitcoin has been holding up despite drops in the altcoin market and in tech stocks,” analysts at crypto research and algorithmic trading firm Efficient Frontier said. 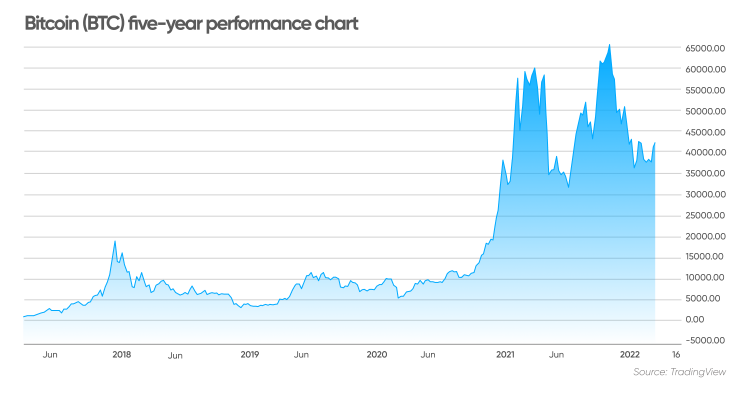 Institutional interest in bitcoin has been sensitive to macro developments

“The same trend continued with outflows predominantly coming from North American providers, with outflows comprising 98% while flows in Europe were broadly flat. We believe the recent negative sentiment in North America is due to continued jitters over regulation and geopolitical issues caused by the Ukrainian conflict. Since the conflict began, we have seen trading volumes rise by 160% and 150% in Ukraine and Russia respectively,” said CoinShares.

Bitcoin funds had the largest outflows, with a total of $33m, although that was half the level seen in the previous week. Outflows totalled $101m over the two years but year-to-date flows remained positive at US$64m, CoinShares data showed.

Analysis from Arcane Research shows that open interest in the bitcoin futures market has been stable at 360,000-380,000 throughout 2022 so far, reflecting its prolonged consolidation.

“The 30-day volatility of the BTC denominated open interest sits at 1.5% and bottomed at 1% on March 5th. This is far lower than the previous lows of 2% seen in July, late August, and early December, and overall suggests that activity from traders is unusually low at the moment,” according to Arcane’s weekly newsletter. “The flat trend in open interest is a result of fewer liquidations as bitcoin trades within a narrow trading range, in addition to less activity from traders during this very uncertain market climate.”

Two strong weeks of inflows into the ProShares bitcoin strategy ETF (BITO) has seen its total bitcoin exposure rise to a new all-time high above 28,000 BTC.

“Strong inflows into futures-ETFs may have spill-over effects on bitcoin’s price as market makers chase for delta-neutrality, leading them to accumulate more in the spot market to offset any possible net short exposure,” the report said. “Overall, the strong inflows to BITO suggest that bitcoin appetite through traditional investment vehicles is increasing.” 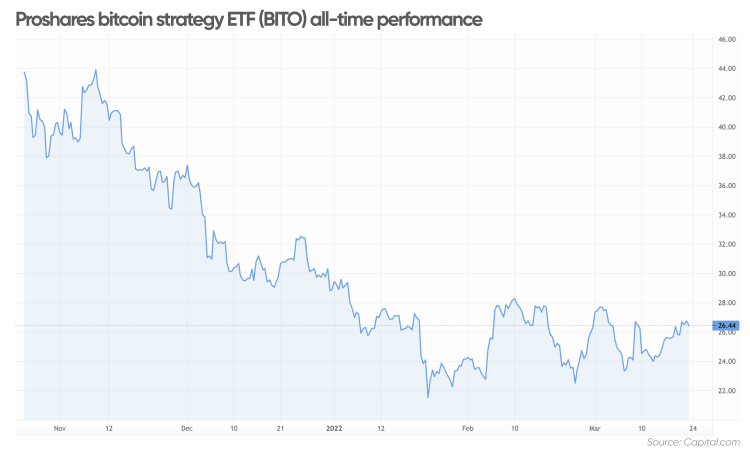 The increased uncertainty in international markets resulting from the Russia-Ukraine crisis has also had an impact on El Salvador’s plan to launch the world’s first bitcoin bond. The government, which was the first in the world to make bitcoin legal tender, announced plans in November to build a Bitcoin City financed by the issuance of a $1bn bond.

The issuance had been expected in mid-March, but the government is holding off with the markets facing increased volatility in response to the crisis.

“El Salvador has allegedly demand of up to $1.5bn worth of Bitcoin Bond. If this is true, the bonds are likely to be oversubscribed,” analysts at Dutch bank Saxo noted.

What do analyst expectations indicate about the direction of the bitcoin price? We look at the bitcoin outlook below.

“After the US Fed meeting on 16 March, risky assets revived as Fed Chief Jerome Powell made it clear that there will be no aggressive and faster rate hikes this year. As Mr Powell said, the Fed is not going to act emotionally and will continue to trust the facts. Markets have expected seven rate hikes in 2022 and this negativity has already been built into prices, but as there are only six meetings left and the Fed likes to take one break after a hike, seven hikes are unlikely.

“Risky assets, including bitcoin, have responded by rising. BTC’s main goal is to break out of the dangerous range of $35,000 to $44,000. If it succeeds, the market will start recovering even faster and BTC will go to test $52,000. Apart from the existing economic and political problems in the world, there are no new ones yet that could affect bitcoin negatively. If things continue to stabilise, we are likely to see the crypto market continue to grow.”

Analysis from BCB Group on 21 March noted that “BTC seems comfortable on a $40k handle but as mentioned a fair few times, needs to get back above $45k-$47k if we are to avoid a pullback. Trendline resistance now comes in just shy of $43k which will be the initial resistance needed to be overcome.”

CoinCodex had a bitcoin price target of $43,636 for 2 April, indicating a retracement from the current price of above $47,000.

It’s essential to keep in mind that cryptocurrency markets remain extremely volatile, making it difficult to accurately predict a coin’s price in a few hours and even harder to give long-term estimates. As such, analysts and algorithm-based forecasters can and do get their bitcoin predictions wrong.

If you are considering investing in bitcoin or other cryptocurrencies, we recommend that you always do your own research. Look at the latest market trends, news, technical and fundamental analysis, and expert opinion before making any trading decision. Keep in mind that past performance is no guarantee of future returns. And never trade more money than you can afford to lose.

CryptoBlog24 is a blog for all the newbies and learners who are new to Cryptocurreince Marker and Blogging. Also find trending News, Mining, How To Earn, affiliate marketing & earn money-related posts.